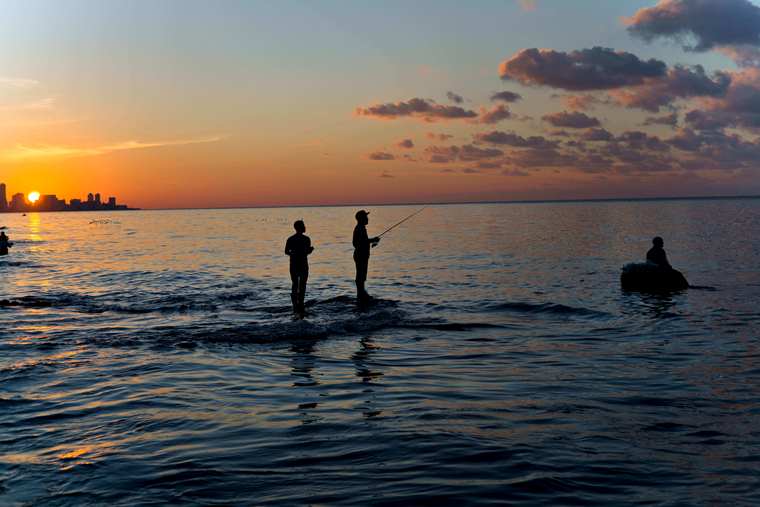 Fishermen stand in the water as a man on a foam raft fishes for bait, off Chivo beach in Havana, Cuba. (AP image)

The United States and Cuba signed a bilateral agreement to prepare for and respond to oil spills and hazardous substance pollution in the Gulf of Mexico and the Straits of Florida on January 9, 2017.

Under this agreement, the United States and Cuba will cooperate and coordinate in an effort to prevent, contain, and clean up marine oil and other hazardous pollution in order to minimize adverse effects to public health and safety and the environment.

Chargé d’Affaires of the U.S. Embassy in Havana Jeffrey DeLaurentis signed the agreement on behalf of the United States. Vice Minister Eduardo Rodríguez Dávila of the Ministry of Transportation signed for the Republic of Cuba.

Remarks from Chargé d’Affairs of the U.S. Embassy Havana Jeffrey DeLaurentis during the signing ceremony of the agreement on preparedness for and response to oil spills and hazardous substance pollution in the Gulf of Mexico and Straits of Florida

The United States and Cuba have been working together since the re-establishment of diplomatic relations on a range of cooperative activities related to environmental protection.  Today we make another advance in our common effort to protect the marine environment in the Straits of Florida and the Gulf of Mexico.

This bilateral agreement is an acknowledgement of the importance of protecting our marine ecosystems and coastal communities from pollution caused by oil spills and other hazardous substances.  Establishing a mutual framework – including diplomatic, legal, and technical aspects – to prevent, prepare for, and respond to oil spills in the marine environment is particularly important for neighbors 90 miles apart.

I congratulate the U.S. and Cuban authorities on this historic achievement.  The U.S. Coast Guard and Department of State have developed a strong and professional relationship with their Cuban counterparts.  This agreement strengthens that relationship, and helps ensure that our coastlines, marine environments, and communities that depend on maritime commerce will be better protected for future generations.

And so it is my great pleasure to sign this agreement on oil spill preparedness and response on behalf of the United States government.