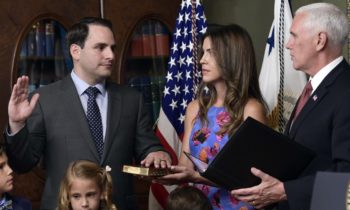 Vice President Mike Pence, right, administers the oath of office to Carlos Trujillo as the U.S. Ambassador to the Organization of American States in the Vice President’s Ceremonial Office in the Eisenhower Executive Office Building on the White House complex in Washington, Wednesday, May 2, 2018. Trujillo is joined by his wife Carmen Mir and three of their four children. (AP Photo/Susan Walsh)