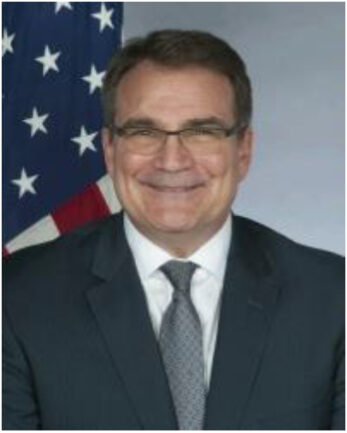 Benjamin Ziff assumed the role of Chargé d’Affaires of the United States Embassy in Havana, Cuba on July 14th, 2022.

Prior to this position, he was Director of the Department of State’s Western Hemisphere Bureau Migration Working Group in April 2021, responsible for coordinating the Department’s hemispheric migration policy and strategy. Mr. Ziff came to this position after being detailed as Senior State Department Fellow to the German Marshall Fund (GMF) of the United States to work on U.S. – European relations and restoring the transatlantic relationship. He was previously Deputy Chief of Mission at the U.S. Embassy in Madrid, Spain and Deputy Assistant Secretary of State for the Bureau of European Affairs responsible for relations with the Nordic and Baltic countries and for the Department’s European Public Diplomacy efforts.

Mr. Ziff has previously served as the Deputy Chief of Mission at the U.S. Embassy in Bogota, Colombia and, earlier in his career, worked in public diplomacy positions in Australia, Israel, Panama, and Peru. After a year at the National War College in Washington, DC, he served as the Deputy Director of the Office of Central American Affairs in the Department of State before taking a series of senior public diplomacy positions at the U.S. embassies in Venezuela, Italy, and Iraq.

A native of California, Mr. Ziff received his B.A. in Political Science from the California State University at Long Beach, his M.A. from the Fletcher School of Law and Diplomacy, and an M.S. in National Security Studies from the National War College. He is a recipient of the Department of State’s Murrow Award for Public Diplomacy and of the Presidential Rank Award. Mr. Ziff speaks English, Spanish, Hebrew, and Italian.